Busting (out) Some Sicilian Balls 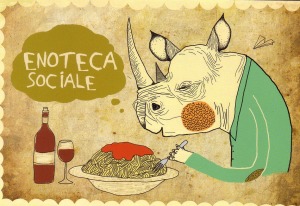 Can I be this good? We shall see.

It wasn’t until I had the addictive arancine at Enoteca Sociale that I decided to try and make them myself. They were so delicious that I could not bear to be without immediate access in my own home.  When I say immediate I mean after you’ve made the rice and the ragu for the filling and dredged them and deep fried them.  But after that–they’re ready in a jiff!  But I’m getting ahead of myself.

The arancine would be my first foray into deep-frying (in my own kitchen). My bible would be The Saveur ‘Sicily” issue (March 2011), currently sitting on the back-burner of my desk taunting me with amazing recipes for local Sicilian dishes (recipe here).

I made the ragu in advance.  Not so much an indication of proper planning and forethought–more a result of “Oh crap– that beef has been sitting in the fridge forever”  Which is why the pictures below, taken at 11pm at night under tungsten lights are a bit….yellow.   I started out with a finely chopped mirepoix (celery, onion, carrot) which I sautéed until soft.

You then add in ground beef and ground pork and cook until browned.  Finally you add fresh, strained tomato sauce and some tomato paste and simmer until it thickens (30 minutes-ish). 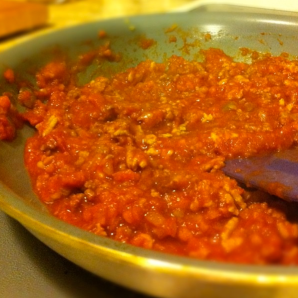 Love this machine. Less incidence of runny mascara. (and mascara is KEY to a good arancine.)

For the rice you begin with a minced, small red onion and sautéed over medium til softened. The you add 1 1/2 cup Arborio rice.

Once you stir in the rice and coat with the oil and onion, you add the key ingredient “1/4 tsp crushed saffron“.  Well, it did not even occur to me I did not have saffron.  Until I could not find it–did I hastily purge it one day in with “clean out the pantry” conviction?  Or was it just stuck somewhere in a large crack in the back of my very deep, 1960s cupboards which would require removing about 15 bottle of various oils and vinegars to even begin a search.  What to do!?  So much for mise-en-place.

I had no choice, I just added some turmeric for colour at least.  (Shhh, don’t tell anyone in Sicily).  Then I added 1 1/2 cups water, brought it up to a boil and removed it from the heat.  You need to let it sit for 20 minutes. 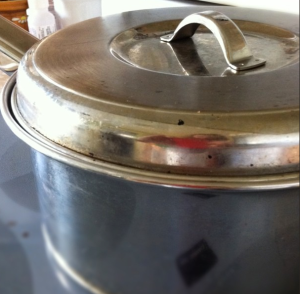 In case your imagination can't handle a covered pot with arborio rice inside.

I grated 2 tbsp of parmesan while I waited and stirred that into the rice with some salt and pepper.

Once everything is combined you spread the rice on a tray and let it cool.

Don’t you (kind of) want to press your face into this?

Meanwhile you can make your batter by whisking together 1/4 cup flour, 2 eggs and 1/2 cup water. Set up a separate bowl for the bread crumbs.

At this point, I am thinking, this is so much fun.

Assembly:  You take a hearty tbsp of the rice in your hand a flatten it into a disc. Then make a bit of a well in the centre and then put in about 1 tbsp of your cooled ragu.

Using your fingers you bring the edges of the rice around the filling to gently enclose the ragu.  Finally you roll the ball around in your hand to seal it and to slightly compact the mixture. The recipe makes 2 dozen arancine.

It took a bit of practise to figure out how much ragu was too much, and to seal it without the ragu showing through.  Donna, our babysitter, had actually stayed to watch me finish and I think after one ragu ball and 23 more to go she was regretting her enthusiasm.  “I’d just buy them frozen” she said.  (Have I mentioned how much more efficient Donna is than me?)

Finally, they were done.  I actually made 22, so I think I sized them fairly well.

Now to dredge in the batter and coat in the bread crumbs.

I started heating up the Canola oil in my Dutch Oven bringing it up to 360 F.

Battered and ready for service. Enoteca here I come!

I fried the arancine in batches of four.

Frying arancine feels rustic, unlike frying mozzarella which feels like a hangover.

Recipe says to pop them into the hot oil for about 3 minutes until the exterior is golden.  I timed it and 3 minutes seemed about right.  Finally my 22 balls of arancine are down and cooling on paper towels.

Oh boy--I wish there was more than two adults and a toddler to eat 22 of these.

And voila! (wait, that’s French) ummm, Tah-Dah!  Is that universal?  My Sicilian balls were a success.  I will make these again.  Maybe in advance and then just deep fry them at the last minute for an appetizer or a patio snack if you were entertaining.

Anything I would do differently?  Well, not eat five in a row.  Remember the saffron.  Also, the rice seemed like it could have been cooked a little more though I followed the recipe and it had absorbed all the water.   (Ok, fine, don’t suck it Enoteca Sociale–you’re still better than me.  For now.)   Maybe I need to be better aquainted with the brand of arborio rice I had.  Overall though–I love Sicily!  Especially if a Sicilian nona wants to make these for me.  Maybe an ad for Craigslist.

Filed under All Recipes, Restaurants and Products, Ruminations on the Edible

3 responses to “Busting (out) Some Sicilian Balls”