Sunday Dinner.  What to make to keep myself out of the kitchen but have the place smelling so good everyone would just know I was cooking ALL DAY?

Brisket was my solution and I had two good recipes.  One from my friend Lisa and one a family recipe from my mom.  Since we were having guests I decided to go with the Brisket I Know.  Our family (I use the term loosely) recipe involves braising in beer and the addition of prunes in the last half of the cooking to sweeten and thicken the sauce as the prunes disintegrate.

In hindsight I wish I took more time with the head.

What is brisket?  The brisket comes from the breast section of the cow and is a boneless piece of beef.  It is a tough cut as there are a lot of connective muscle tissues in the meat.  This makes it ideal for long slow cooking.  Brisket is also the cut of meat that is brined to becomes corned beef.  Brisket is further categorized into two cuts– the flat cut and the point cut.

Let me lead you to a great article I found about cooking brisket by Janet Fletcher where she explains all this and more in mouth-watering detail:

“The point cut is the smaller of the two…… Some butchers refer to it as the second cut or deckle point, as it contains the deckle, a hard pocket of fat. Others erroneously call this whole piece the deckle. The flat cut is larger, thicker, more uniform in shape and leaner. It is often referred to as the first cut and is what most people probably consider the traditional brisket cut.

Because this (whole brisket) is still a pretty sizable piece of meat — about 7 pounds — many retail butchers cut it in two. One piece, which is more square and uniform in shape, is typically called the flat half. The other piece, roughly triangular, may be labeled as the point half.

Many butchers consider the fatty point cut, or second cut, virtually unsalable as brisket, so they treat it as trim and grind it. Their customers prefer the beauty, uniformity and lean appearance of the flat cut, or first cut.

They don’t know what they’re missing.”

My “recipe” which, as many recipes which come from my mom (a great cook),  was a little bit random and a little bit written by someone who’s made something a zillion times.  So, when I went to the brisket recipe to make my shopping list I saw that it called for 7-8 pds of brisket.  Wow–that seemed a lot for 4 people.  I called my mom and asked her and she told me that the brisket will shrink–“You won’t believe how much it will shrink!” she said.   Alright, so I bought a lot of brisket.  I had to pull out my large roasting pan to make it fit.  And I doubled the sauce part of the recipe as there can never be too much sauce. 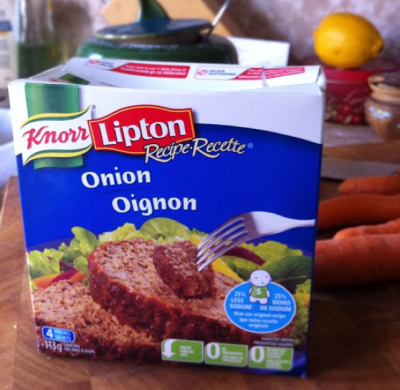 OK, so what else do you need to know about the recipe?  Well, full disclosure, it involves Lipton’s onion soup mix.  And like the margarine it Marion’s 75 year old fudge, I just go with it.  Who am I to change years of “traditional” recipes based around soup mixes?

(And I do remember loving onion soup mix in a chip dip.  Which I totally forgot about til this moment…only three ingredients needed to make it…the soup mix, sour cream and a babysitter. )

Moving beyond the fake food, here’s what else you’ll need.

Onion and garlic of course (I so need those onion goggles.  I cry from the second my knife sees the onion.)

Brown sugar and tomato paste and some BEER.

First you sear the meat and put it into your roasting dish with the sautéed onion and garlic and your braising liquid which is combo of the beer, brown sugar, onion soup mix and tomato paste.

You also throw in the carrots.  Then cover and put into the oven at 300 C°.  For three hours according to my mom’s recipe.

Hmmm, I started to become very happy to have 7 pds of brisket.

So at three hours (which was 9pm) the brisket was nowhere near fork tender.  My husband starts informing me that I’ve overcooked it just like his childhood Sunday roasts were overcooked and tough.  He’s having serious flashbacks even though I try to explain the point of  braising.  He is worried I will force him to relive the horror of his childhood Sunday dinners at our Sunday dinner.

I focus away from the looming danger of ridiculous married-couple argument and turn the oven up to 325 °C.

I am also yawning and wondering how long this is going to go on.  It’s Saturday night and I had not planned on this brisket date to last so long.   I add the prunes and go to see what’s on the PVR.

The brisket stayed in til closing time–or almost–1 am.  But boy, it was delicious at that point.  I must have eaten at least a pound just picking at it.  To make sure it was done.

The effort (watching TV while the brisket cooked) was worth it.  On Sunday  all I had to do was make mashed potatoes and roast some veggies.  I heated the brisket up slowly in the oven til the house smelled better than a Cherry Cola Smelly Marker.

Our friends brought wine and an appetizer (sardines, cold pat butter, toasted baguette, lemon, parsley) and Tad had a bacon wrapped scallop craving, so he made those.   It was an eat-talk-eat-talk kind of evening.  And at the end-I had a whole lotta brisket left over.   But you know what?  If I had to do it all again, I wouldn’t change a thing.

I guess I like my brisket the size of a newborn baby.  Though I wish it wouldn’t keep me up til the wee hours.

And btw: 7 pds of brisket was enough for 10 people.  My mom later realized she had doubled the recipe for a family gathering.  Though she did try to give me the “your brisket must have been OLD– it should have shrunk much more”  excuse.

Filed under All Recipes