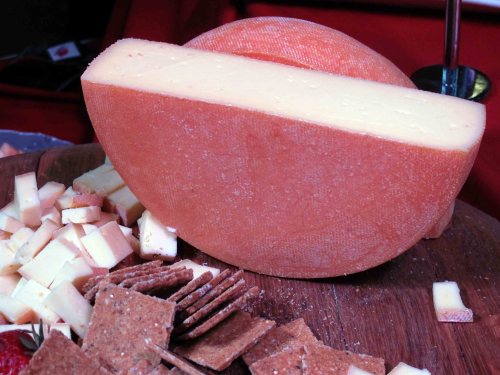 Very happy to be able to get the scoop (below) on the new Canadian Cheese Awards from cheese monger and cheese writer Kelsie Parsons—  he is in the last legs of finishing his Canadian Cheese Book and I look forward to having more on that down the road.

There’s a new champion in the Canadian cheese world – Le Baluchon, an organic washed rind cheese made in Quebec by Marie-Claude Harvey and her team at Fromagerie F.X. Pichet. It was named cheese of the year at the first-ever Canadian Cheese Awards held April 7 at St. Lawrence Market in Toronto.

Three awards in total were handed out for Le Baluchon – best semi-soft cheese, best organic cheese, and cheese of the year. Each award is well deserved. 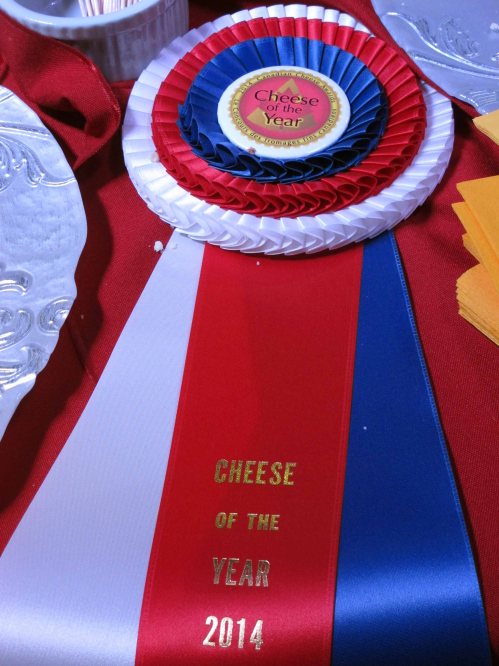 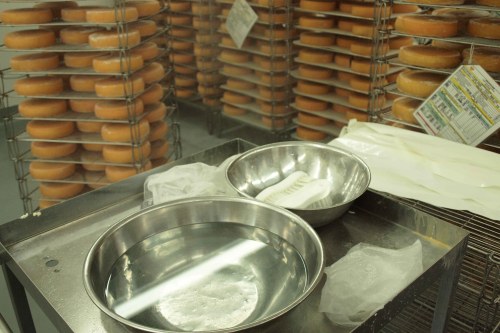 Fromagerie F.X. Pichet’s ripening room with bowls of brine and brushes in the foreground.

Washed rind cheeses, such as Le Baluchon, are frequently rubbed with a brush that is dipped in brine. This technique adds salt to the cheese, keeps its exterior moist, and creates the proper environment for the growth of Brevibacterium linens (or B. linens for short) which creates the pinkish orange rind typical of this style. 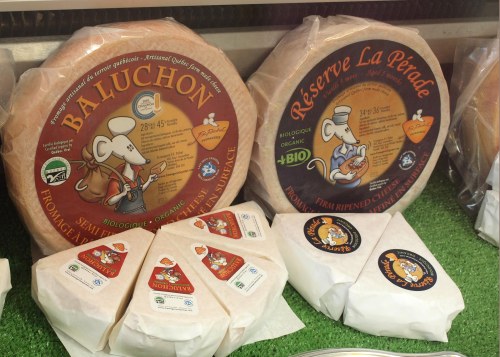 The name Le Baluchon refers a hobo’s bundle of possessions tied to a stick.

What I love about Le Baluchon is its complexity and depth of flavour. There’s so much happening in every bite – flavours of nuts, butter, a slight bitterness to the rind, and a subtle pungency. Although the judging was blind (they could see the cheeses but weren’t told the names), the judges picked a cheese that is consistent in quality from batch to batch. I have never had a wedge of this cheese that was less than excellent. 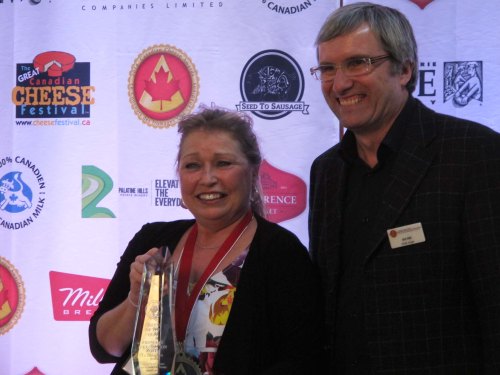 Marie-Claude was instrumental in changing regulations in Quebec to allow for certain fromageries to legally produce unpasteurized cheese aged less than 60 days. She has been inducted into the prestigious Guilde de Fromagers for her contributions to the cheese industry. 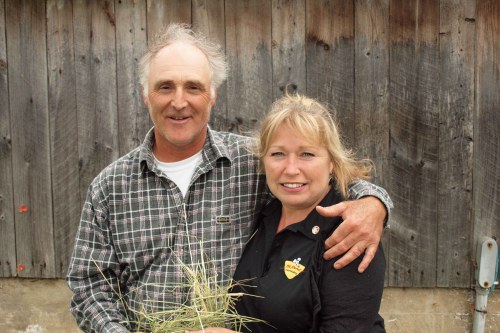 Marie-Claude Harvey and Michel Pichet pose with dry grass grown on their farm.

Michel Pichet restarted his family farm in 1989 with a focus on producing high quality organic milk and keeping his cows healthy and happy. He now has a mixed herd of 90 Brown Swiss, Holstein, and Ayershire cows of which he milks 50 twice a day. 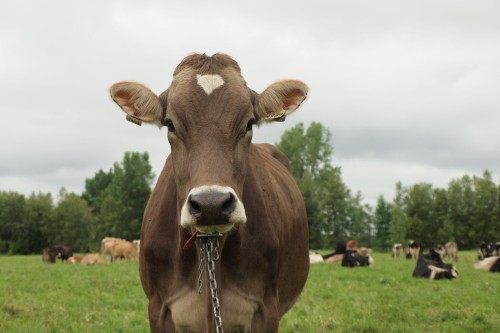 A curious Brown Swiss cow on the Pichet family farm.

The cows have access to the outdoors all year round and their feed is free of genetically modified organisms and pesticides. Michel is proud that his cows live much longer than the average dairy cow and they have more offspring. He explains that most cows have 2 or 3 calves in their lifetime but on his farm they give upwards of 12 calves which are never killed for veal. Producing certified organic cheese costs Fromagerie F.X. Pichet an extra $75,000 per year but as Marie-Claude says, it’s “the price of respecting the environment.”

An amazing amount of cheese was entered into the competition; 291 cheeses from 76 cheese companies were entered.  They competed in 30 categories. There were 16 categories based on cheese style, 5 regional awards, and 9 special categories including milk type, farmstead, organic, and new cheese. 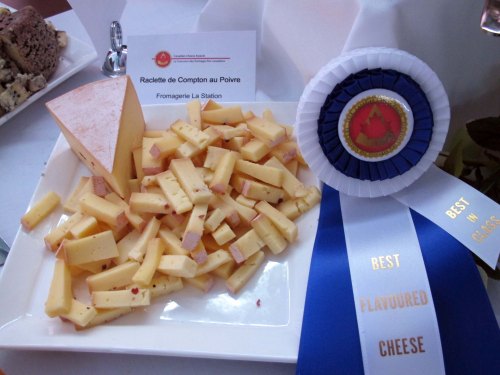 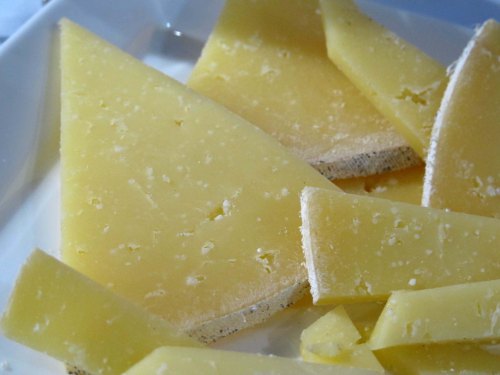 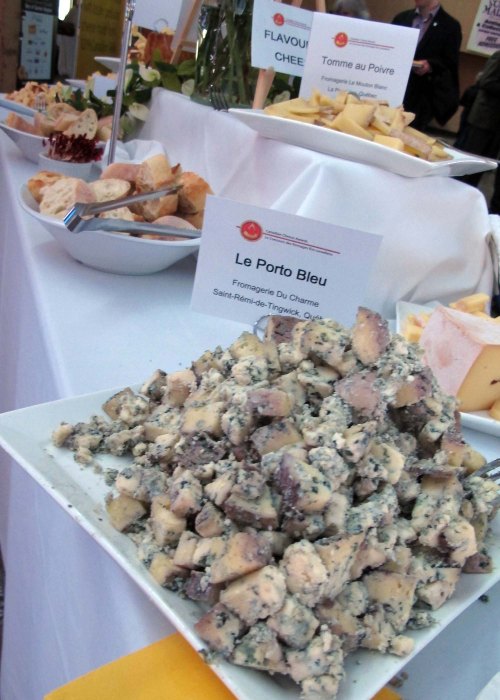 An all-star lineup of cheese experts gathered at the University of Guelph at the end of February to judge the cheeses. Professor Art Hill, a respected expert on dairy and cheese science, led the judging. The group did a terrific job narrowing down the entrants and every finalist is worth seeking out. 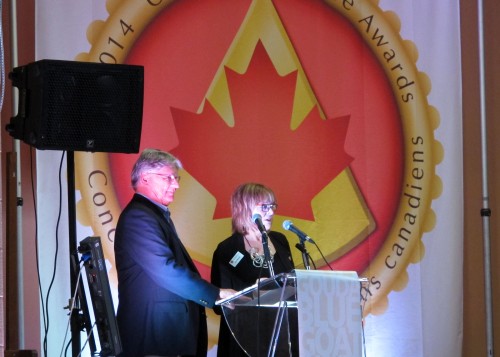 Georgs Kolesnikovs is the creator of the Canadian Cheese Awards and the Great Canadian Cheese Festival (the third annual festival will be held June 7-8 in Picton, ON). Kudos to Georgs for his hard work creating these two terrific events. After the Ontario Cheese Society crumbled a few years ago, Georgs stepped up and sought to unite Canadian cheesemakers and promote their products in new ways. I’m excited to see what he has planned next though I’m sure we’ll continue to see greater unity within the Canadian cheese industry especially with the looming increase in the specialty cheese import quota proposed in the CETA agreement. 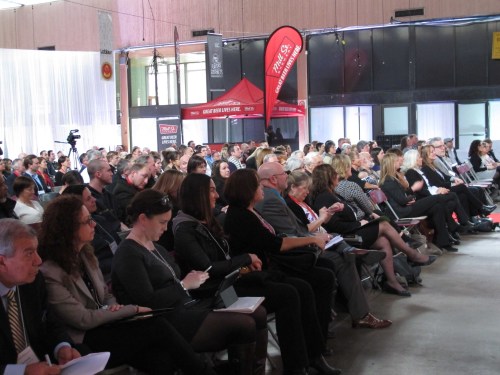 At the end of the award ceremony, Georgs challenged cheesemakers to submit better quality cheeses for the next competition. Apparently, some entrants were inferior in quality to what they are known for. It was a rather solemn end to the awards ceremony but I’m confident it’s not a sign that the quality of Canadian cheese as a whole is slipping. Regardless, the bar has been raised and I know cheesemaker are already planning which cheeses they’ll send to the next Canadian Cheese Awards which will be hosted in Montreal in 2016 followed by Vancouver in 2018.

Once again, congratulations to all the finalists and category champions. There are many world class cheeses made in Canada and Georgs’ events are wonderful opportunities to recognize and celebrate the work of our talented cheese producers.