(Another amazing post–maybe one of the best so far– from Kelsie Parsons to look back over 2012 in cheesemaking.  For more of Kelsie’s blogs just type “Curds and Eh” into the search window on the home page or select Curds and Eh under CATEGORIES.  And for intro to his adventure click here.   Now I can’t wait to read his book!! SR)

This is the time of year when many people reflect on the past year. What’s new? What happened? What are the highlights?

2012 was a pretty awesome year for me. After years of dreaming, I finally took time off work and travelled across Canada to write a book about Canadian cheese. But this post isn’t about me, it’s about the wonderful people I met along the way.

It seems like every couple of weeks there’s a new cheese factory popping up somewhere across Canada. What an exciting time to be involved in cheese! Through this post I’d like to call attention to some of the best new cheesemakers out there.

In no particular order, here is my list of the top cheesemakers that began making cheese within the past couple of years. Some are new to the cheese industry, others have been working in it for years but only recently started their own cheese companies. Keep an eye out for their cheeses and if you get the chance take a wedge home to enjoy. 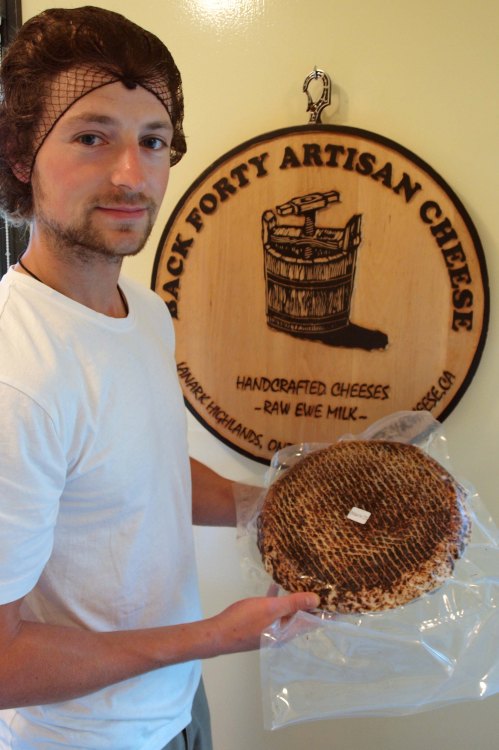 Back Forty Cheese has been around for many years but this past year Jim Keith sold his company to Jeff and Jenna Fenwick. They’re a young couple who decided to move from Hamilton, ON to a beautiful property in the Lanark Highlands in Eastern Ontario. Jeff is the cheesemaker and Jenna is a talented textile artist who transformed Jim’s old sheep barn into her studio. 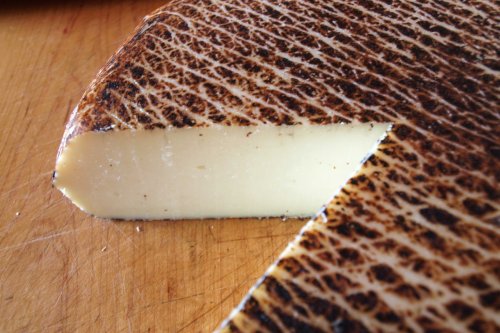 Bonnechere is one of my favourite cheeses ever. Jim Keith styled it after a rare French cheese and it’s actually scorched over an open flame, which gives it a unique toasted appearance. When Jim put his home and business up for sale I was terrified that we’d lose this awesome cheese. Fortunately, Jeff spent several months working with Jim to learn his techniques and Bonnechere continues to be as nutty and delicious as ever. Jeff is also producing Back Forty’s three other raw sheep milk cheeses – Madawaska, Flower Station Feta, and Highland Blue. Rumour has it that he has plans to create a new cheese as well. I can’t wait to try it.

Based just outside of Woodstock, ON, Shep Ysselstein is the owner and cheesemaker at Gunn’s Hill Artisan Cheese. Shep was raised on a dairy farm and became interested in making cheese after a trip to Thunder Oak Cheese Farm. He spent some time working at a farmstead cheese factory in the Finger Lakes region of New York and then apprenticed at Natural Pastures Cheese Company in Courtenay, BC. A highlight of his career was working in the Swiss Alps producing a cheese known as Berner Alpkäse. There, Shep and another cheesemaker milked 30 cows morning and night and spent their days making cheese. 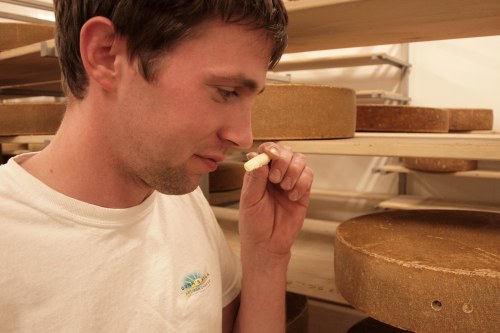 Shep’s experience in Switzerland had a huge influence on him. He now creates 3 varieties of washed rind cheeses influenced by the ones he made and ate in Switzerland. His 20-25kg Handegg, is styled after Berner Alpkäse and named after the Swiss town where he made it.

Shep shows off a wheel of Five Brothers

One of Shep’s other cheeses is known as Five Brothers because he in fact has 4 brothers (two of which work on the family farm tending to their large herd of dairy cows and crops). On the outside, Five Brothers looks like a Gouda but cut it open and large eyes (holes) are revealed giving it the appearance of Emmenthal. The flavour is subtly sweet, with a nuttiness that increases towards the rind and the floral aromas of this cheese are wonderful. I highly recommend Gunn’s Hill cheeses.

Speaking of Five Brothers… another one of my favourite new cheesemakers is Adam Blanchard. He owns Newfoundland’s only artisanal cheese company – Five Brothers Artisan Cheese. Despite the name, the company consists only of Adam (though, like Shep, Adam does have 4 brothers). Five Brothers produces perhaps the smallest volume of cheese of all Canadian cheese makers. Adam doesn’t have an expensive pasteurizer, a huge vat or other impressive equipment.

The stov top and fridges where the Magic happens

His production facility consists of a commercial kitchen where he makes cheese in stock pots on the stove top and he cuts the curds with a fillet knife. He ages his cheeses in reworked refrigerators. Five Brothers produces mozzarella, queso fresco, cheddar, brie and the occasional blue. Restaurants in St. John’s feature Adam’s cheeses on their menus and he also sells his cheese at the farmers market where it regularly sells out. 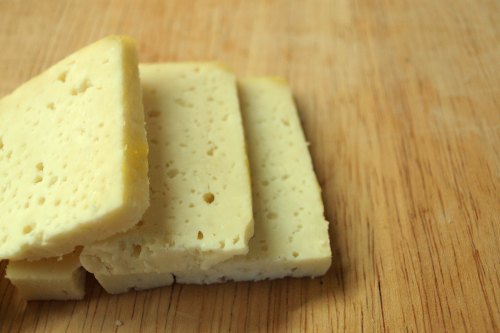 Adam is a chef by trade and is seriously into cheese and food culture. He has only been making cheese for a short while but I know he’s taking every opportunity to learn as much knowledge as possible about his trade (he recently completed a cheesemaking course in Texas).

From my brief stay in Newfoundland, I could tell that Adam is starting something really special. I seriously wish I could be in St. John’s so I can see his line-up of cheeses grow and evolve.

Ron Muise worked as a chef for years near Bath, England. He returned to Cape Breton Island, where his ancestors have lived since 1620 and he now has two young children, raises and milks sheep, and makes cheese. He says he left the restaurant business because he grew tired of working 18 hour days but I think Ron likes keeping busy.

Wandering Shepherd–Check out that Rind!

Ron’s creativity in the kitchen translates well into his small cheese business Wandering Shepherd. When I visited, Ron was ripening 8 varieties of blue cheeses. He says, “As a cheesemaker you should follow your heart. You’re going to do what you love and I love blue cheese.”

Like most chefs, Ron enjoys experimenting and tweaking his recipes. He recalled a recent batch of blue that turned out particularly well but the recipe was written on scraps of paper that went through the wash. No worries, Ron laughed it off explaining that he remembers how he created that batch.

Simon Hamel used to work at Fromagerie Tournevent (makers of Chevre Noir) and Fromagerie Eco-Delices (producers of some wonderful raclette) but he’s now working at La Moutonniere and making his own cheeses there under the name L’Atelier.

In a previous Curds & Eh! post I predicted that Simon’s ripened goat cheese, Le Chevre a Ma Maniere, would be winning top awards. Since then it won best artisanal goat cheese at the 2012 Caseus awards and it also placed third overall. Congratulations Simon!

While Simon showed me around La Moutonniere’s ripening rooms, he picked up a wheel of aged cheese, pointed to a reddish spot on it and said, “this is my favourite kind of mold, it tastes just like mushrooms!” He scraped it off and we savoured the flavour. No cheese, just mold. It’s that kind of passion and attention to detail that is needed to create an exquisite cheese such as Ma Maniere.

At Fromagerie Nouvelle France, Marie-Chantal Houde creates Zacharie Cloutier, a washed rind sheep cheese aged for 6 months. The rind of Zacharie Cloutier resembles an unwaxed Manchego or Petit Basque and the flavour is reminiscent of nuts and hay. It’s one of my favourite cheeses. Many others have picked it as their favourite cheese as well; in its first year of production, Zacharie Cloutier won as the grand champion of the 2011 Caseus awards and then placed first in its category in 2012!   (very worth seeking out but sadly it is very hard to find outside of Quebec last I checked with the distributor, merde SR)

Marie-Chantal didn’t win these awards by accident. She studied cheesemaking in Poligny, France; has worked as a consultant helping artisan producers develop recipes and she teaches classes at the Vermont Institute of Artisan Cheese. I would love to sit down with her and soak up some of her cheese knowledge.

This summer I had the pleasure of spending an afternoon watching Marie-Chantal work. She whistles and sings as she makes cheese and constantly has a huge smile. It’s obvious that Marie-Chantal absolutely loves what she does.

When I arrived at The Cheesiry, Rhonda made a couple of baa-lattes, lattes made with sheep milk, and we immediately bonded over our shared love of sheep milk and all things Italian. To celebrate her 30th birthday, Rhonda spent 3 months travelling Italy by herself. She fell in love with Italy and before she returned to Canada she began planning her next trip. Four months later she was back in Tuscany working in a restaurant in Montalcino and then on a farm near Pienza where she learned how to make pecorino (pecorino is the generic Italian term for sheep cheese). The farmer eventually let Rhonda make the cheese by herself, which must have been quite daunting but also a huge confidence booster. 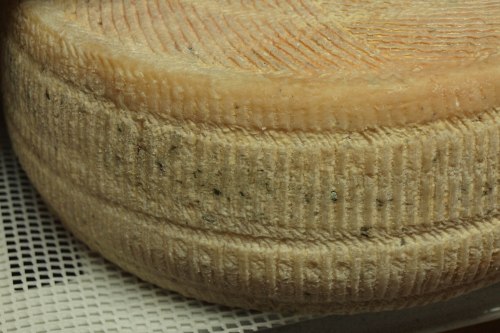 Rhonda took her new skill with her back to Alberta where she now milks 88 ewes. Through the aptly named Cheesiry, Rhonda produces a variety of pecorino cheeses, including the one that she made in Italy. Her pecorinos have rustic, textured rinds and big bold flavours. Quello deliziosso formaggio!

Like most of the other cheese makers on this list Shana Miller isn’t new to the cheese world, she worked as the cheesemaker at Poplar Grove for years. This year she launched Upper Bench Winery and Creamery with her husband Gavin, a well-respected and very skilled winemaker. 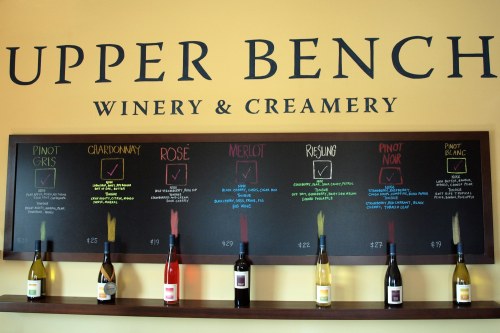 Both wine and cheese are made under the same roof at their facility in Penticton, BC. Shana displays a creativity and ingenuity in creating her rich and complex pasteurized cow milk cheeses. My personal favourites are King Cole, a Stilton-sized creamy blue; Okanagan Sun2, a square washed rind cheese; and Grey Baby, a surface ripened blue. They’re all perfect for indulging in with a (couple) bottle(s) of wine. Upper Bench is a must-visit spot for any foodie visiting the Okanagan Valley.

Upper Bench cheeses on a campground cheese board

There are many other cheesemakers that have started producing cheese within the past couple years but these are my top picks for best new cheese makers. I’m sure this won’t be the last time you hear about them.

To all the above cheesemakers, thank you for your hard work, for taking a risk, following your passion and working everyday to make some of the best cheeses out there. I admire all of you and I can’t wait until we meet over cheese again.