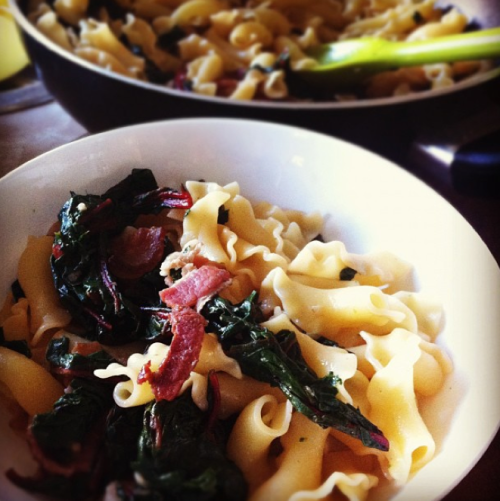 Not bad for a "grasping for ideas" night....

I must apologize.  Did the “+” sign in the title make you think you were looking at a menu from Colborne Lane?  Yes, I did it on purpose.

I wanted  to make a simple night’s dinner seem more exciting.   I am posting this “recipe” as it really is dead easy and so delicious.  And I thought maybe others would want to give it a try when grasping for a quick, tasty meal one night.  It’s not exactly groundbreaking but I figure sometimes we all need a little inspiration.

I started with the bacon. About 6 slices, chopped and fried in a large skillet (use a large skillet so you can add the pasta to it later).  Drain the bacon but reserve about a tablespoon of oil in the skillet for the Swiss chard and garlic down the road.

Now grab that bunch of Swiss chard, wash it and cut out the stems.  I was inspired by Paula Tiberius’s baby Swiss chard Post.  I threw the leaves (torn into bite-sized pieces) into some boiling, salted water and cooked for a few minutes until they were tender, then I drained them. 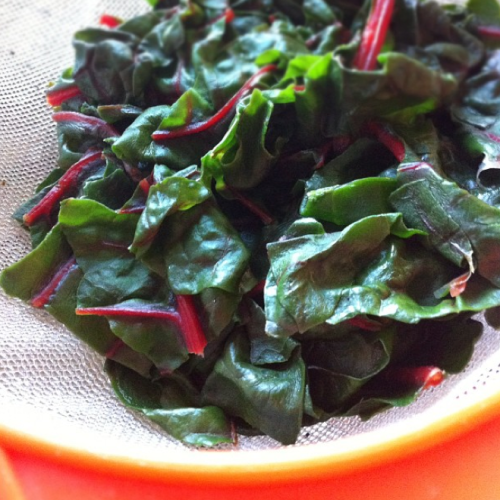 Meanwhile cook your pasta in well-salted water (that’s the PC Black Label Fiorelle you see in the bowl) and drain it, reserving some pasta water for later.  Add the pasta  to the skillet and put it back over medium heat. Toss everything around to combine.  You’ll probably need to add a bit of pasta water just to keep it moist.  Add fresh pepper at the table.

The chard leaves absorb the garlic and bacon flavours and the pasta and bacon….is well….pasta and bacon.   This is my “Rachel Ray” 30-minute meal.

And I bet it would even WOW last-minute guests.

Filed under All Recipes, Uncategorized