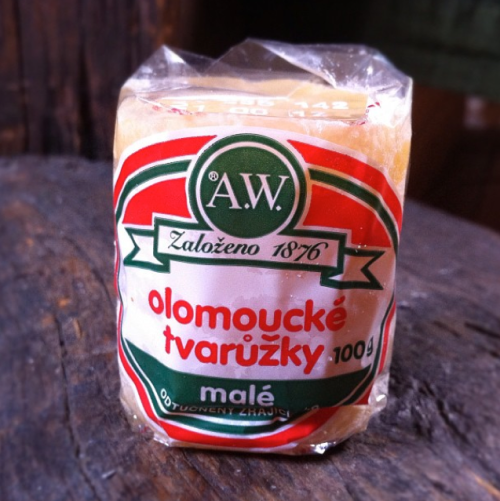 I saw this cheese in the corner store and immediately recognized the pale gold colour– like honey comb– with its waxy looking exterior .  The cheese has a small, squat shape.  Somehow it just looks like it will be stinky.  I only remember it from my childhood–maybe my parent’s bought it at the Prague Deli?

Does this scare you?

My dad, Dave (brother) and I scooped up a few rounds of this traditional Czech staple from the “Jabka” (corner store), bought some fresh buns (rohliky) and headed back to the apartment.  Then we sliced open the olomoucké tvarůžky  and slapped slices onto the bread.

Oh so so smelly. I could also describe the smell as “barnyard meets band-aid”.  And the taste as “salty, porky bacon”.  So if you’re into that, this cheese rocks.  Saying that you should never have the O.T. without this:

This one’s for Ania.

Savoury, dense and a little chewy,  the olomoucké tvarůžky are a washed-rind cheese made with skim milk–so very little fat, lots of pungent, and very tasty.

They also can be bought in large Walmart size containers (for mass consumption I guess) and flavoured with spices like caraway.  You can also  have it for lunch on bread with  butter and onions.  I’d plan that for the day you decide to “work from home”.

Here is some history about the traditional cheese from a Radio Prague piece (2004):

…the curd cheese with no preservatives and little fat, has been produced in the town of Loštice in the Olomouc region since 1876. Their first mention in historic documents goes back even further: in the 17th century, even Emperor Rudolf II himself is said to have been a fan.

And here is some more interesting info:

Loštice also boasts the Museum of Olomoucké tvarůžky (open July – August, Monday – Saturday mornings, or as per agreement); the sale of products can be found in the company store and there is also most probably the world’s only tvarůžky-selling vending machine. (vending machine cheese! )

And if you want to avoid this indelicate delicacy, it is also offered under the code name, sýrecky.