Hi everyone, here is the first blog in the Curds and Eh series. Welcome Kelsie!

By day I’m the Cheese Manager at Sobeys Ira Needles in Kitchener and by night I’m a curd nerd who can’t stop reading about cheese (and eating it too!). I started working at Sobeys nearly 2 years ago and I’m responsible for a 36′ long cheese wall, which is home to 350 varieties of cheese. 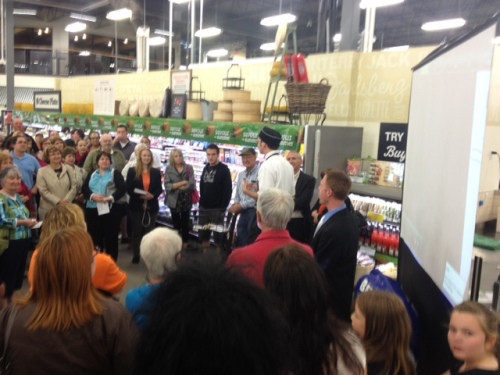 Several months ago I told Russ, my store manager, that I was planning on taking the summer off to travel across Canada and write a book about Canadian cheese.  He was incredibly supportive but wanted to make sure I’d return to Sobeys when I’m done. Of course I promised I’d be back. When I began my travels Russ wanted part of me to stay with the cheese wall so he hired one of my staff to carve my head out of St. Albert Mild Cheddar! 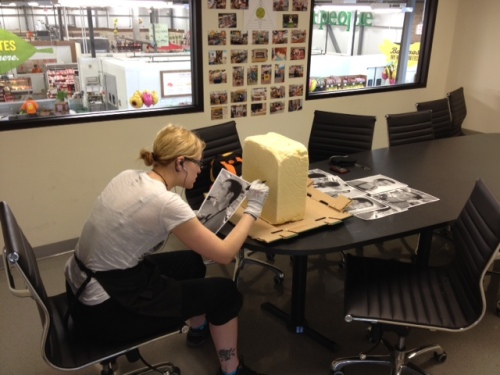 To here….It’s quite the honour having my head in cheese! I’m still amazed! It’s like looking in a cheese mirror! 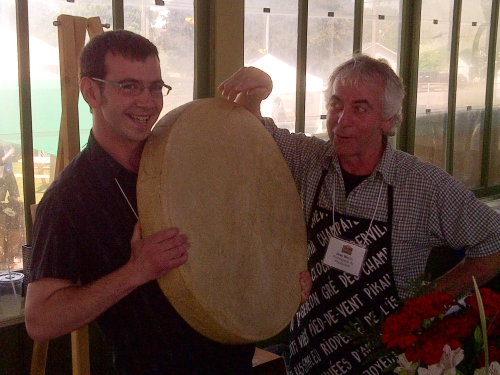 With a Jean and a beautiful wheel of Louis D’Or at the Great Canadian Cheese Festival.

I’ll be in Quebec for a full month but I’m afraid I’ll still only try a handful of all the cheeses produced there. After Quebec I’m headed to the Maritimes and Newfoundland(!) and then across Northern Quebec and Ontario. The longest   the road will be driving from Thornloe Cheese near Lake Timiskaming to   in Thunder Bay. Ontario is a massive province! I’ll then spend the month of August traveling the Prairies, Alberta and B.C. When I consider my journey as a whole, 3.5 months seems like a really long time to be on the road but breaking it down province by province it seems like a whirlwind adventure. Regardless, I’m really looking forward to sharing the journey with you.

Poutine from St. Albert Cheese on Ottawa. Can man live on poutine alone?

Why such an epic cheese adventure? I’ve always wanted to write a book about Canadian Cheese and I figure now is the right time. In many ways I’m modeling my book after Cheese Primer by Steven Jenkins. The book is organized by region opposed to style and as a reader I felt like I traveled around Europe with Mr. Jenkins. I’m aiming for my book to be about individual cheeses as much as it is about the people behind them and the regions they’re from. Of course there will be loads of photos in the book; I just wish I could make it scratch and sniff (what a stinky book!).

One thing I’m missing though is a title for the book. I considered simply Canadian Cheese. It’s too the point but not very catchy. I find cheese people usually have a cheesy sense of humour so I also considered titles such as The Whey Across Canada and Curds & Eh! I like them but I think there’s a better title out there. Now this is where I ask for your help. If you can help me come up with the perfect title you’ll be recognized in the acknowledgements and you’ll get a free book (when it’s printed).

Kelsie Parsons worked as a cheesemonger for Cheese of Canada and Provincial Fine Foods in Toronto and his photos of Canadian Cheese are featured in Juliet Harbutt’s World Cheese Book (2009). He earned his Cheesemaking Certificate from the Vermont Institute for Artisan Cheese and has since apprenticed at Monforte Dairy. In 2010, Kelsie was selected as a delegate to represent the Toronto Slow Food convivium at Terra Madere in Turin, Italy. Kelsie is the Cheese Manager at Sobeys Ira Needles in Kitchener and is currently writing a book about Canadian cheese. He also blogs at Sobeys.com/foodiefeature