Remember that Bryan Adams song?  “Everything I do I do it for a Niagara Gold Crunch Grilled Cheese?”  A real wedding fave.

I spent this afternoon as a judge at The Dairy Farmer’s of Canada Grilled Cheese Cook-Off.  (I know, does lunch get any better?)  Four of Canada’s top chefs went head to head and each served two grilled cheese sandwiches made with cheese made from 100% milk  (you’ve probably seen the little blue cow label on your cheese, it means that a cheese is made with all cow’s milk, no other additives–aside from salt and culture of course.)

Just wanted to give you a little brief of the menu and the chefs, so I’ll start with Chef Bangerter and move on from there. 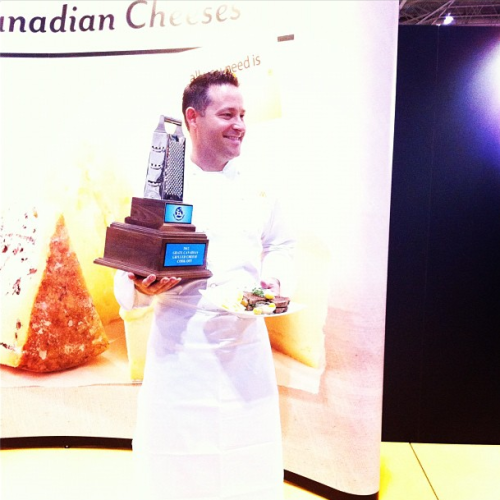 Niagara Gold Crunch (The Winner)
Niagara Gold cheese, sour dough bread, prosciutto, baby arugula,  with the bread brushed with mayo that had been flavoured with garlic, thyme and pepper before being grilled.

*this was also served with pickled grapes and a sparkling fresh grape juice that was the perfect compliment to the savoury sandwich.  I hear it will be going on the menu…..  (but here is the RECIPE if you want to DIY it)

This was the Chef’s dessert grilled cheese. It was made with mascarpone cheese and fresh berries with a some basil added in between the grilled brioche. It was served with aged balsamic vinegar.

Yum, if you love crab dip, this is your man-wich from Chef Howell. The crab dip is made with cream cheese, marinated artichokes, fresh parsley and some hot sauce.  There as also a hint of smokiness from smoked Gouda and real crabmeat–of course.  Recipe here. 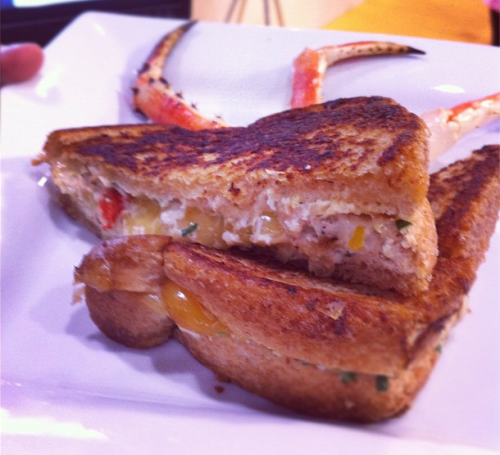 This was inspired by Chef Howell’s love of  Southern Italy (he gives culinary tours of Italy, just FYI!) this sandwich was on olive bread and had Asiago cheese, pesto, tapenade and sundried tomato compote inside. All homemade of course and incredibly flavourful. 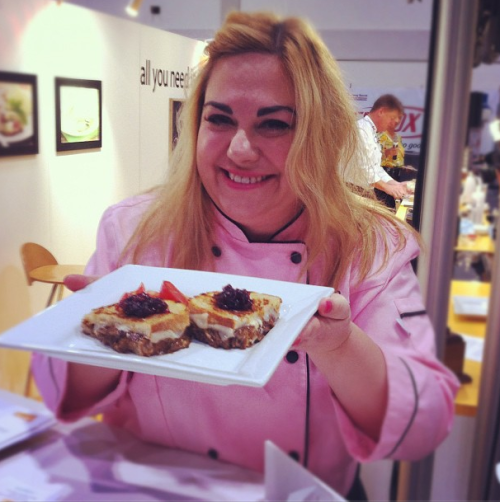 Chef Robberecht made this grilled ‘wich with pulled beef short ribs, provolone and blue cheese on sourdough–oh–and a bit of onion jam for some tangy sweetness. Must be eaten with fork and knife.  (Or just a pile of napkins on hand).

This baby came close second for me.  It looked gorgeous on the plate (excuse my shoddy photo). The bright red, candied cherry tomatoes were bursting with flavour and gave the sandwich such a freshness married with Triple Cream Brie and then crunchy bacon (ok, my mouth started watering as I wrote that).  Trust me, you want the recipe for for the candied-tomato vinaigrette. 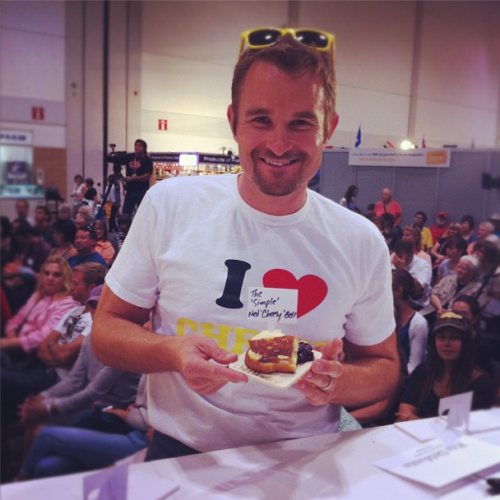 This was a great concept, because the comfy, cozy grilled cheese we all want on a rainy day is just cheese melted and in this case served with a fruit chutney.  Showcased the bread and the cheese (Courtenay Cheddar and Island Brie).  And the presentation was, can I say, cute?  Would Chef Bell kill me?  I loved it.

This little number was made on a country loaf with Hot Pepper Cheddar and Pacific Pepper Spicy Verdelait.   The red bell pepper jam on the side made it, I think you’ll be wanting this recipe too.

And who were my fellow judges?  Elizabeth Baird, Rita DeMontis and Kevin Durkee of Cheesewerks which brings us to our free grilled cheese! 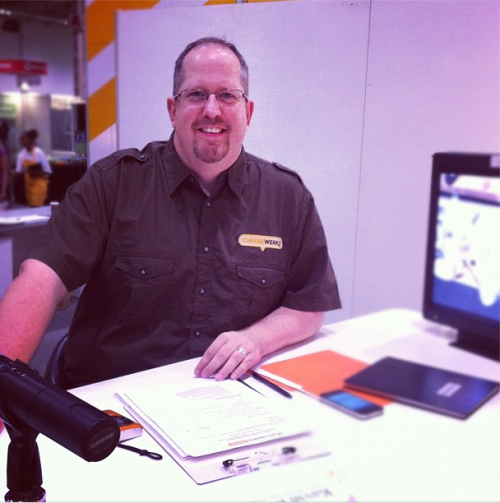 HI EVERYONE–THE GRILLED CHEESE VOUCHERS ARE ALL SPOKEN FOR. Thanks for emailing, we’ll do another giveaway soon!

Kevin has generously donated a few sets of tickets for a free Original Grilled Cheese (so you can either bring someone or eat two sandwiches–it’s a toughie).

Cheesewerks (56 Bathurst St, Toronto) which also serves soups and mac and cheese, also offers some amazing sodas that are made in-house (and written up by Macleans magazine).

Email me at sueriedl@gmail.com with the words “Grilled Cheese” and I’ll give them away, first come first serve!

Curds and Eh, Episode 6: Cheese Rolling and 3000 tonnes of curd

These people are chasing wheels of cheese down the Whistler slopes

This post is part of a guest blog series by Kelsie Parsons.   See the recent Globe and Mail piece about his travels.

Although we’re half-way through August the festival season isn’t over yet. Here are a few cheesy festivals to keep you busy.

St. Albert Cheddar Co-op makes some of the best cheddar curds in Canada. Fortunately for us they created a festival to celebrate squeaky cheddar curds. The annual festival began in 1994 when St. Albert Cheddar celebrated its 100th anniversary. This year’s festivities include a giant corn maze, an antique tractor show, beach volleyball, a magician, plenty of live music, wine and surprise, surprise…CURDS!!! Over the course of the 5-day festival, St. Albert typically gives away 3 tons of cheddar curds for free. 3 TONS of curds!!! That could make a lot of poutine!

I have never been to the curd festival but I’d love to go sometime! If you’ve been (or are going) I’d love to hear all about it! 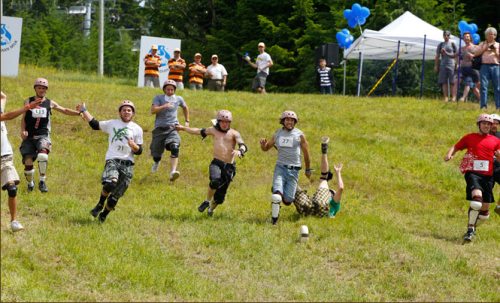 More cheese rolling–view from the bottom of the hill!  Helmets! Knee pads! This is intense.

Where will you be on Saturday August 18th from noon-4pm? I’m planning on attending the Canadian Cheese Rolling Competition in Whistler, BC and I’m super excited to see it! As you may know, I’m spending my summer visiting cheesemakers in every province and will be writing a book about Canadian cheese. I’ve actually planned my whole trip so that I end up in British Columbia for this competition!

This guy for Pope. Just a thought (by Sue).

The Canadian Cheese Rolling Competition is based on the legendary cheese rolling competition in Gloucestershire, England but with a Canuck twist. All the cheese at the festival (and there’ll be a lot) is made from 100% Canadian milk.

Cheese rolling is pretty straight forward. Basically, cheese is rolled down a hill and people attempt to catch it. The lucky winners get to keep an 11-pound wheel of cheese and they receive two ski season passes to Whistler Blackcomb. Last year’s festival saw over 165 participants and 12,000 spectators! There’s more than just cheese rolling and running though. The festival also includes a costume contest, cheese seminars and a market featuring cheesemakers from Courtenay, BC to Charlottetown, PEI.

This event is sponsored by the Dairy Farmers of Canada and aims to bring attention to great cheeses made from 100% Canadian milk. As someone who is eating different Canadian cheese every day I have to say there’s a lot of great cheese made here!

UPDATE FROM KELSIE:  The winner of the 2012 cheese rolling is Tyler Belan, front end manager at Highland Sobeys in Kichener, ON.  Congrats Tyler! 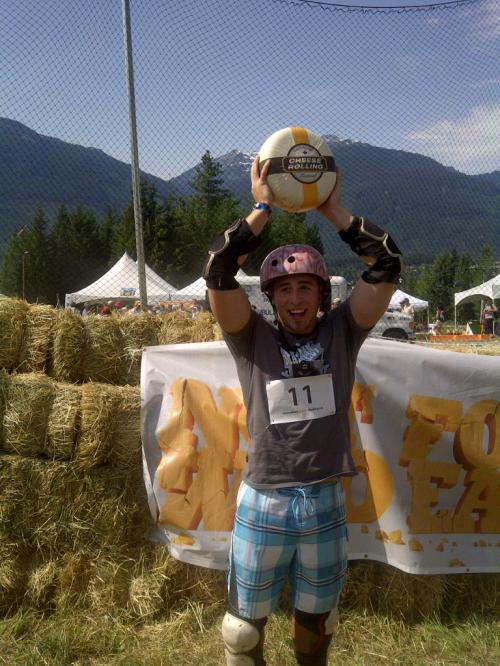 For an up-to-date countdown until the festival  check out canadiancheeserolling.ca

Come out and taste the best grilled cheese of 2012.

The start of the Canadian National Exhibition (CNE) in Toronto is always a bittersweet time. Around this time you’ll hear people exclaim, “The CNE is opening! I can’t believe summer’s almost over!” But that sentiment doesn’t last long as they indulge in tasty treats and then attempt to hold them down while on dizzying rides.

One of the hot food events at the CNE will be The Grate Canadian Grilled Cheese Cook-Off held in the All You Need Is Cheese booth. At this event top chefs from around Canada compete to create the “gratest” grilled cheese sandwich.

In 2010, Michael Howell (chef and owner of The Tempest in Nova Scotia) won for his Panini Toscano which featured Canadian Havarti, prosciuto, baby arugula, fresh figs, lemon aioli, and balsamic vineagar. Whoa! I’ll be cooking this up when I return home in September.

Michael will be defending his title against three top chefs from across Canada: Jason Bangerter, executive chef at O&B Luma and Canteen restaurants in Toronto; Ned Bell, executive chef at the Yew Restaurant at The Four Seasons Hotel in Vancouver; and Liana Robberecht, executive chef at the Calgary Petroleum Club in Calgary. Each chef has created two recipes featuring cheeses made from 100% Canadian milk and the winning chef will walk away with the 2012 Grate Canadian Grilled Cheese trophy. Recipes from the event will be posted on the All You Need Is Cheese (www.allyouneedischeese.ca/grilledcheesecookoff) website after August 29th. 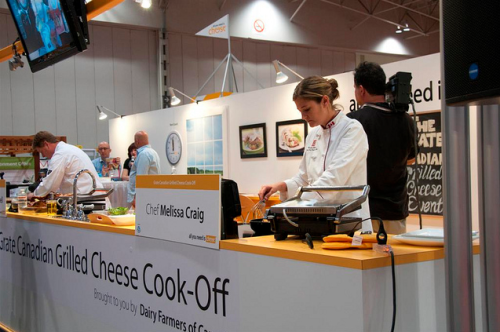 Chef Melissa Craig at the 2010 competition.

One the judges who will taste all these gooey creations will be Cheese and Toast’s very own Sue Riedl! I’m sure Sue makes a mean grilled cheese sandwich too! (Awwww, stop. SR) What’s your favourite grilled cheese sandwich? Personally, I like mine with horseradish cheddar (go on!  me too…SR)…or maybe a triple cream mixed with a Swiss style cheese. There are infinite possibilities!

The competition will be held on August 29th at 11am in the All You Need Is Cheese  booth at the CNE in Toronto, ON.

**Photo of the grilled cheese from http://theinterrobang.com