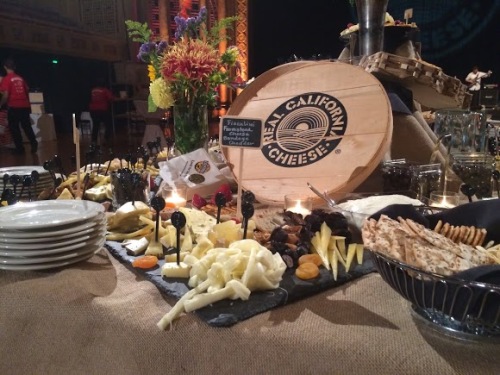 From Sue:  Another amazing and insightful entry into the world of Cheese–Kelsie Parsons was selected to be one of the TWO official cheese mongers for the American Cheese Society Awards–a huge honour- and here he reports back!  Go Kelsie!

For several years I have wanted to become involved with the American Cheese Society. It’s an organization that promotes and celebrates the work of cheesemakers (many of whom are also farmers and some of the hardest working people I’ve ever met). It supports the production of raw milk cheese, the aging of cheese on wood, and encourages its members to meet and exceed food safety standards. The American Cheese Society has existed as long as I have (since the summer of 1983) and has united the American cheese industry. The annual cheese conference is a great example of this unity – cheese people come together to learn, grow, cheer each other on, and celebrate each others wins.

The cheese spread at the New Member Reception, sponsored by Sartori 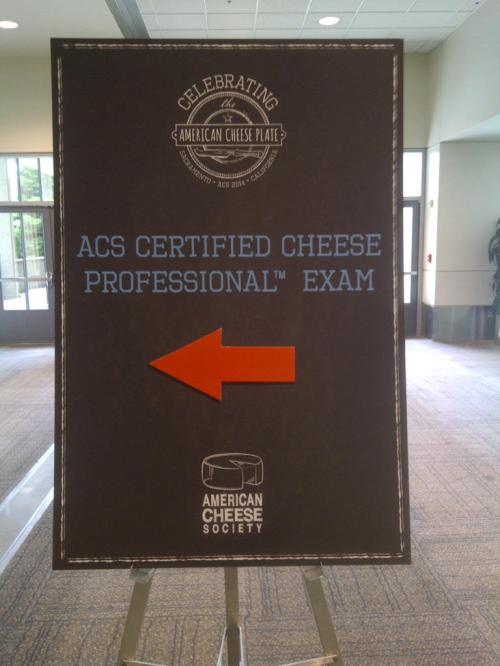 There was never a dull moment. Last year I attended the conference for only one day (to write my Certified Cheese Professional test) so 2014 was the first time I truly attended the conference. Saying it was a memorable experience would be an understatement. Randall Felts (from Whole Foods in Birmingham, Alabama) and I were selected as this year’s two Official Conference Cheesemongers. 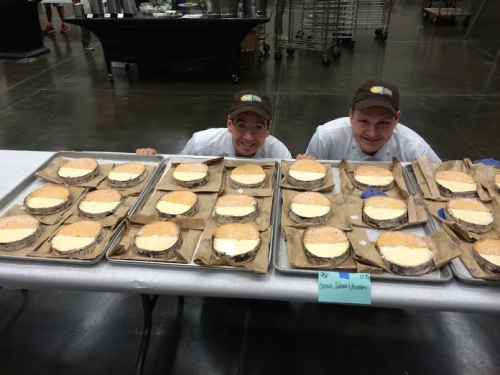 Kelsie and Randall pose with Jasper Hill’s Winnimere, which was awarded Best of Show in 2013.

Randall and I were in touch over conference calls and email for several months prior to meeting in person. One email from Randall prior to the conference really stood out. It stated, “Any nervousness I feel is just that we live up to the great products that we are showcasing.  I’m sure we will showcase them great, but I have such a great respect for the producers for whom we will be plating that I want everything to be top tier just like the cheese.” Even before we met in person, we had connected. We understood that we were incredibly lucky to work with so many amazing cheeses and our aim was to ensure that each cheese was handled and presented as best it could be. We shared a great respect for the hard work of the cheesemakers and we knew every time we served a cheese, we would also be serving it to the people who laboured to create it. 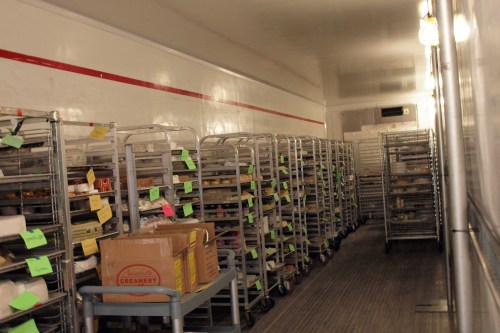 Behind the scenes at the conference there were five reefer trucks full of cheese. Four were home to cheese for the judging and competition and one truck was for all the events that Randall and I were responsible for. Every rack in our reefer truck was organized by day, by event, time, and cheesemaker. The first rack in the truck contained everything we’d need for the first event and furthest rack inside the truck was the last one we needed. Every cheese was in its place and there was no searching necessary to find it. We simply brought a rack out, cut and plated all the cheese, and arranged the tables for each session. 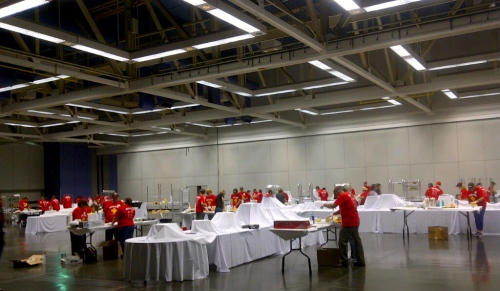 Besides all the wonderful cheese, the real highlight of the conference was the people I met and had the privilege of working with – Randall, the ACS staff, the presenters, and, most notably, everyone who wore a red “Cheese Guard” shirt – the volunteers. Roughly 70 volunteers helped Randall and I prepare cheese for tasting sessions, breakfasts, and receptions. Add in those who helped with the judging and competition, the cheese sale, and the incredible number of volunteers who helped set up the Festival of Cheese and it’s astounding how many people came together to make the conference a success.

I could never imagine working with a more talented and delightful group of people. All the volunteers were amazing, and together they made the conference possible.

Jess, one of the awesome volunteers, posing with a beautifully spun ball of Oaxaca cheese

Many volunteers were professional cheese mongers, some were students at a local culinary school, and some were locals who wanted to join in on the fun, but all loved cheese and worked together so efficiently and professionally that the whole process was absolutely seamless. It was a real pleasure working with so many colleagues in cheese who I have such an incredible respect and admiration for. I sincerely hope we meet again soon so we can relax and enjoy some cheese and a pint together.

I’m planning to volunteer at next year’s conference in Providence, Rhode Island and, if you attend in the future, I encourage you to consider volunteering as well. It’s a ton of fun, a great way to meet some kick-ass cheese people, and the conference truly can’t run without the volunteers.

There’s much more that I’d love to share with you about the conference. This is just the start. Look for part two soon.

Featured today for as my Monday “Lunch” piece in the Globe, you won’t find a faster or more satisfying meal.

PS I know Whole Foods and Cheese Boutique has them, leave a comment if you’ve seen them anywhere else and we can get everyone hooked up!

Happy New Year and well, thanks

HAPPY NEW YEAR and a giant THANK YOU to all you people who visit my blog.   Because I can only click “LIKE” once on anything I write.

Cheese and Toast needs you and I’m grateful for your eyeballs (and mouse hand).   So eat some good stuff Saturday night.

Filed under Food Haiku, Ruminations on the Edible, Uncategorized

Skip the carton, Make a Pitcher of Homemade Nog

Today is the day we decorate our tree.  The Christmas Tree is my favourite part of the holidays.  As unexcited as I am to dig through the pile of boxes in the basement on the annual ornament hunt (why do I have two bins of Easter decorations?  Really?) I am pretty psyched to get the tree going.

Thinking that many of us might be putting up lights, Christmas shopping or lamenting the start of carols on the radio, I figured egg nog and alcohol could settle us right down.  Cursing also helps immensely.

If you’re going out for the weekend grocery shop, you only need  few ingredients to make your own egg nog: eggs, milk, cream, sugar. (I know! Why have you not done this before?)

My friend swears by the Mac’s Milk version (and I too admit to glugging the store-bought) but this is lighter, frothier and fresher and really a cinch to make.

HERE IS THE LINK TO MY CHEF BASICS  EGG NOG MAKING VIDEO.

Once this becomes your signature holiday drink–you can move onto your own egg nog serving set. 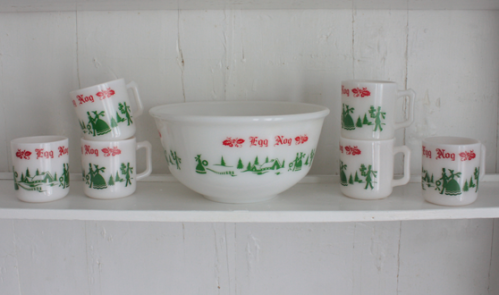 Make sure you use the freshest eggs possible and have an alternate beverage available for guests like pregnant woman, children or the elderly who shouldn’t consume raw eggs.

With an electric beater whisk together egg yolks and sugar until sugar dissolves and yolks are pale and fluffy. Add milk, cream and nutmeg and whisk until well combined. Refrigerate until cold.

Just before serving whisk egg whites (at room temperature) and a pinch of salt to soft peaks. Add teaspoon of sugar and whisk until firm peaks.

Fold into eggnog to make it extra light and fluffy.

If you want to add alcohol you can whisk in 2 to 3 ounces of bourbon or rum before adding the egg whites. 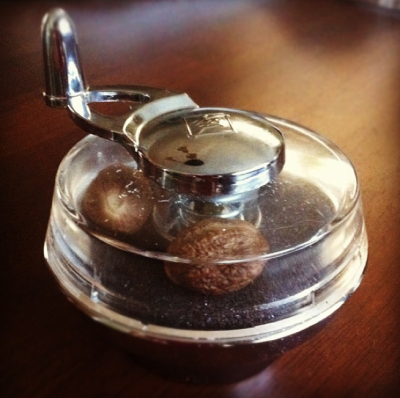 Another opportunity to use my beloved nutmeg grater. (purse size convenience!)

Filed under All Recipes, Blogs with cooking tips, Ruminations on the Edible, Uncategorized